Throughout the CK community, many individuals lead remarkable lives of service, faith and excellence. Since 1983, Christ the King HS has proudly inducted alumni, faculty and friends who have brought honor to the school and inspired  us by their example. Through their character and achievement, they personify the mission of CK and serve as lasting role models for our students.
If you wish to nominate an a deserving individual, please click here to fill out a nomination form.
Click here to view the Hall of Fame selection criteria.
Submissions for 2020 induction must be received by January 16, 2020.  Any submissions received after that date
will be considered for the following year.
Click here for a list of all CK Hall of Fame Members.

Congratulations To Our 2019 CK Hall of Fame Inductees 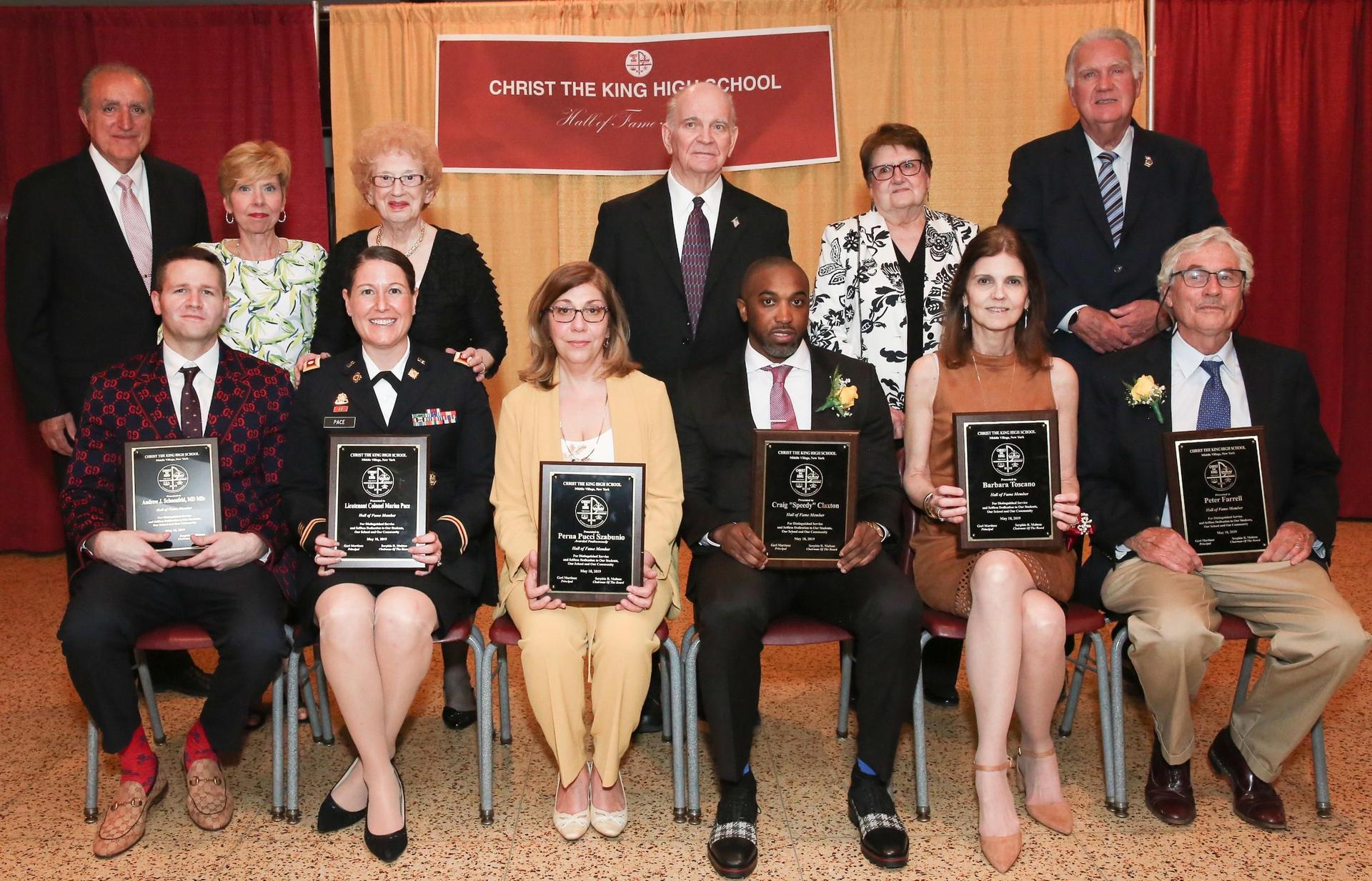 Back Row(standing):  Members of the CK Board of Trustees 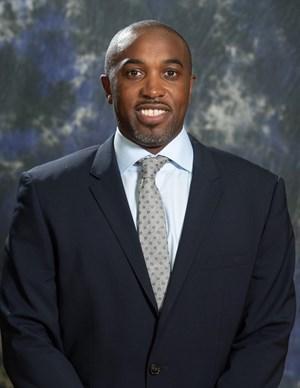 Craig “Speedy” Claxton enjoyed a decade-long career in the NBA. He was a first round draft pick of the Philadelphia 76ers in 2000, and earned an NBA title as a member of the 2003 Champion San Antonio Spurs.

Craig Elliot Claxton was born and raised in Hempstead, NY.  Coming from an athletic family with seven children, he was a standout at a very young age.  Called “the speedy kid” by an opposing team’s coach when he was in 8th grade, he got the nickname “Speedy” from that team's players who joined him when he entered CK in 1992.

Honing his skills as a lightning fast point guard for the championship CK Royals, Speedy went on attend Hofstra University on full scholarship. His highly-successful collegiate career with Hofstra saw Claxton average 13.3 points per game in each of his four seasons.  His stellar tenure culminated with a 22.8 points per game average in 1999-2000, his senior season. Claxton graduated Hofstra in 2000 as one of only six players in school history to score 2,000 career points (2,015). He also graduated as the program's all-time leader in both assists (660) and steals (288), and was a two-time Player of the Year selection in the America East Conference (1998, 2000). He was the 2000 winner of the Haggerty Award, given to the top player in the Metropolitan New York area, after leading Hofstra to an America East Conference championship and its first NCAA Division I tournament berth in 23 years.  Speedy was inducted into the Hofstra Hall of Fame in 2011.

Craig “Speedy” Claxton has rejoined his alma mater and is currently in his seventh season as Hofstra Basketball staff and his sixth as an assistant coach. Claxton is the very proud father of three daughters, Aniya, London and Kiersten.  He resides in Dix Hills, New York. 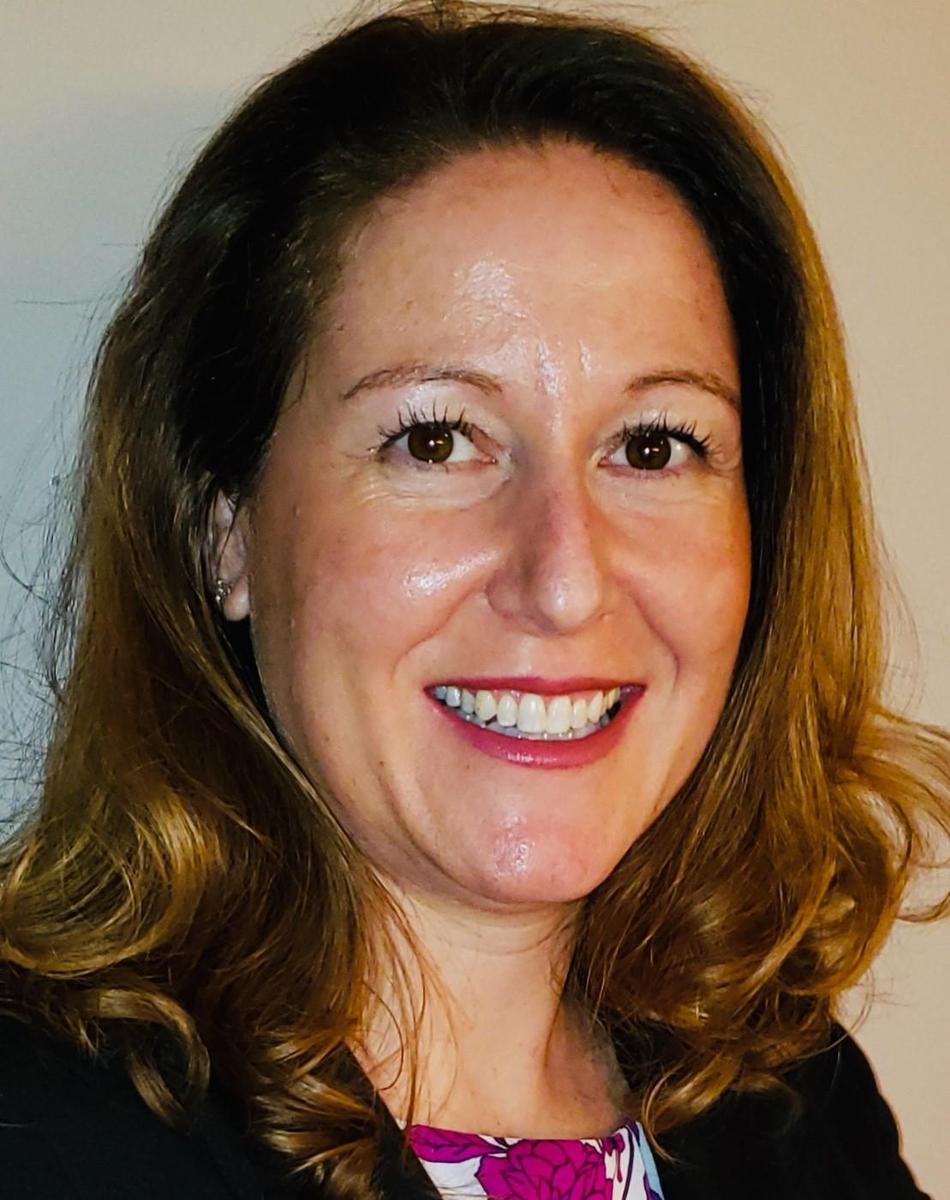 Marisa Pace was born and raised in Woodside, Queens. After graduating Christ the King High School in 1996, she attended the United States Military Academy at West Point and graduated in 2001 as a Transportation Officer.

Marisa, served two combat deployments in Iraq. Firs, during the invasion in 2003, as a Platoon Leader with 68th Transportation Company and again in 2005 as the Plans and Training Officer for 37th Transportation Brigade.  Marisa’s other assignments include Osan Airbase, Korea where she served as the Officer In Charge of the Movement Control Team from 2001-2002 and Germany where she served as a Platoon Leader, Company Executive Officer and Training Officer.  She served in the Pentagon from 2007-2012 working in the headquarters of the Department of the Army for Logistics and the Army Office of Congressional Liaison.

In 2012 she started the Army Congressional Fellowship program where she attended George Washington University and obtained a Masters in Legislative Affairs. In 2013 she had the opportunity to work in the office of Senator Mary Landrieu (D-LA) as a Defense Fellow.  Afterward she served on the staff of the Chief of the Army Reserve as a Congressional Liaison handling the appropriations portfolio.  She spent 2 years at FT Hamilton, NY as the Deputy Commander for the 1179th Transportation.  She is currently attending War College at National Defense University in Washington, DC where she is working toward a Masters in National Securities Studies.

Marisa is an avid triathlete and runner, completing more than 40 races over the last ten years. She especially enjoys combining activity with service causes, and she annually raises charitable funds and cycles in the FDNY ride commemorating the 343 firefighters killed on 9/11. She enjoys skiing and traveling, and has visited 40+ countries on 6 continents. Marisa lives in Marylandwith her new husband Bryce Freeman. 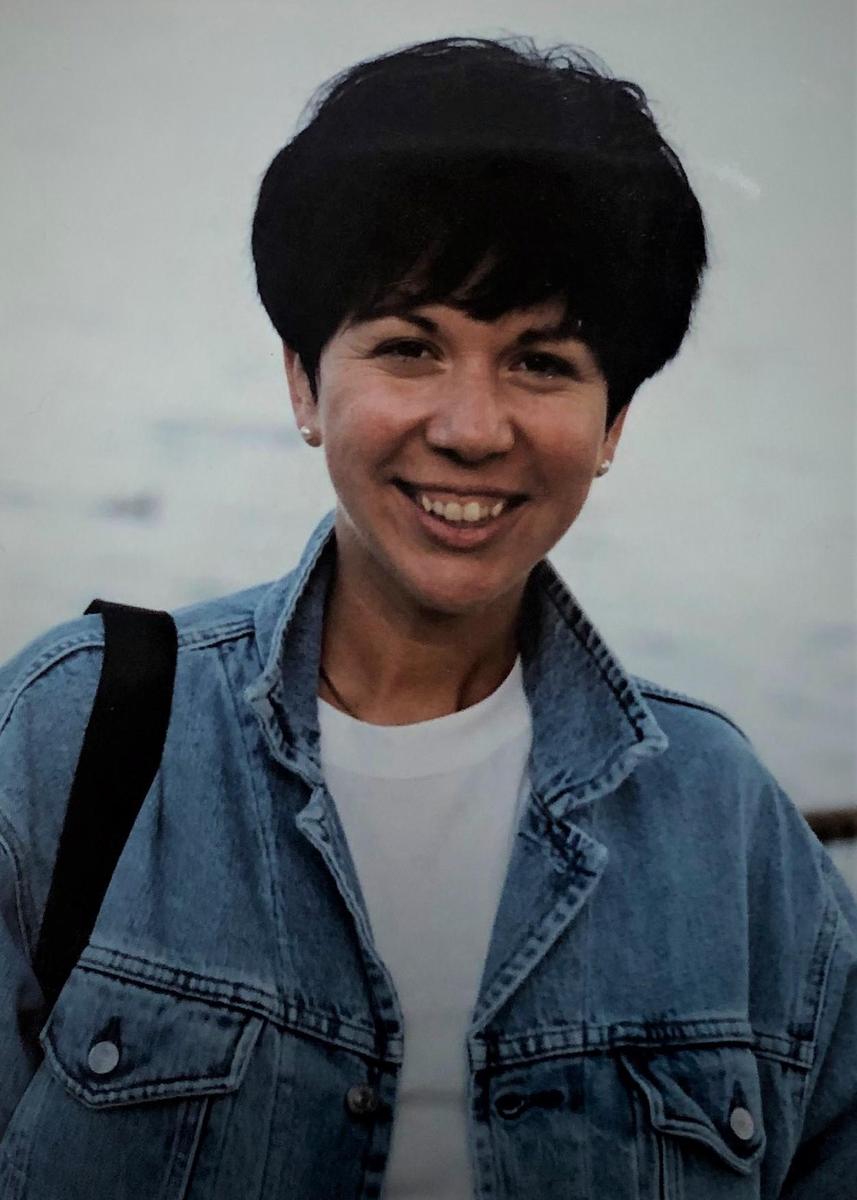 Perna Perna Pucci Szabunio was born to Dominic and Frances Pucci November 15, 1957 in Ridgewood, NY. Perna was the oldest of 3 children, brother Vito (CK ’78) and sister Domenica (CK ’82). Perna attended Our Lady of Miraculous Medal in Ridgewood until 1971.  Perna graduated from Christ the King High School in 1975. As a student, Perna participated in academics, sports, religious and community activities. She worked part time at local pharmacies. Perna was accepted at St. John’s University and graduated in 1980 with a BS in Pharmacy. In 1986, Perna completed her MS in Clinical Pharmacy from SJU.

As a pharmacist, Perna worked as Coordinator of IV services at Westchester Square Hospital. From 1985-99 she was at Manhattan Eye, Ear and Throat Hospital as Assistant Director of Pharmacy and Materials Management.  Perna was manager of the Prescription Benefit Plan Department for the National Medical and Health Card Systems. She was dedicated to her profession and  participated in the American Society of Hospital Pharmacists and the NYS Council of Hospital Pharmacists.

Perna loved her family, friends, music, and photography. She was active in church at CK and Sacred Heart in Glendale. Perna experienced several major health problems that never diminished her indomitable spirit. After surviving a heart attack, she became active in the American Heart Association. Her faith supported her throughout many health challenges and certainly at the end of her life.

At CK Perna was well loved and respected by her peers and maintained strong relationships with her numerous school friends. Perna was compassionate, humorous and unforgettable. The class of 1975 was fortunate to have her as classmate. Perna represents the true spirit of CK, a devoted individual that despite the difficult high school years succeeds personally and professionally with respect, dignity, and grace. 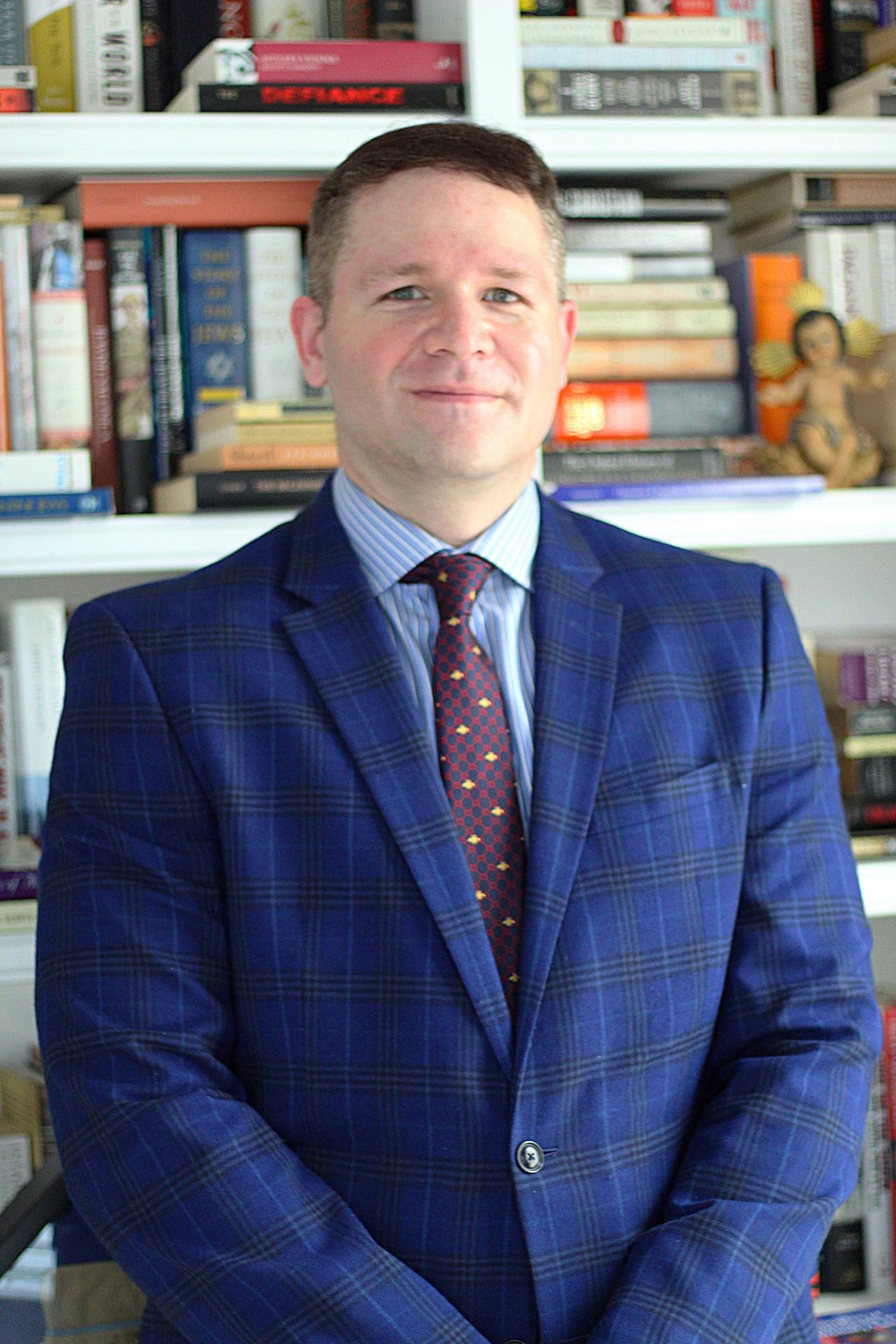 Andrew Schoenfeld was born and raised in College Point, Queens.  He graduated from Christ the King High School in 1996.  He is a graduate of the University of Michigan and The Northeastern Ohio Universities College of Medicine.  He completed spine surgery training at Harvard Medical School.

Dr. Schoenfeld is currently an Associate Professor at Harvard Medical School and the Director of Spine Surgical Research for the Harvard Combined Spine Fellowship Program.  He is also the Director of Fellowship Training at the Center for Surgery and Public Health, charged with educating the next generation of health services surgical researchers at Harvard.  He has published over 190 papers in the scientific literature and edited three textbooks. Considered one of the pre-eminent thought leaders in spinal healthcare today, with grants from the National Institutes of Health, Centers for Medicare and Medicaid Services and the Department of Defense, his research into treatment decisions for spinal cancer and opioid use after surgery are practice-changing nationwide.  He was appointed as the youngest Deputy Editor ever at the pre-eminent orthopaedic research journal, The Journal of Bone and Joint Surgery.  He was previously a Deputy Editor at The Spine Journal and Section Editor at the Journal of Orthopaedic Trauma.

Dr. Schoenfeld has been recognized as one of the twenty most prominent leaders under age 40 in the field of spinal medicine.  His research has received national awards from the Mid-America Orthopaedic Association, the Academic Surgical Congress and the International Society for the Study of the Lumbar Spine, and he has twice been named to the prestigious North American Spine Society Outstanding Research Award. He received the Order of the Spur,  the Order of Prince Danilo, the Order of the Lion and the Royal Confraternity of Saint Teotonio for work outside the field of medicine. 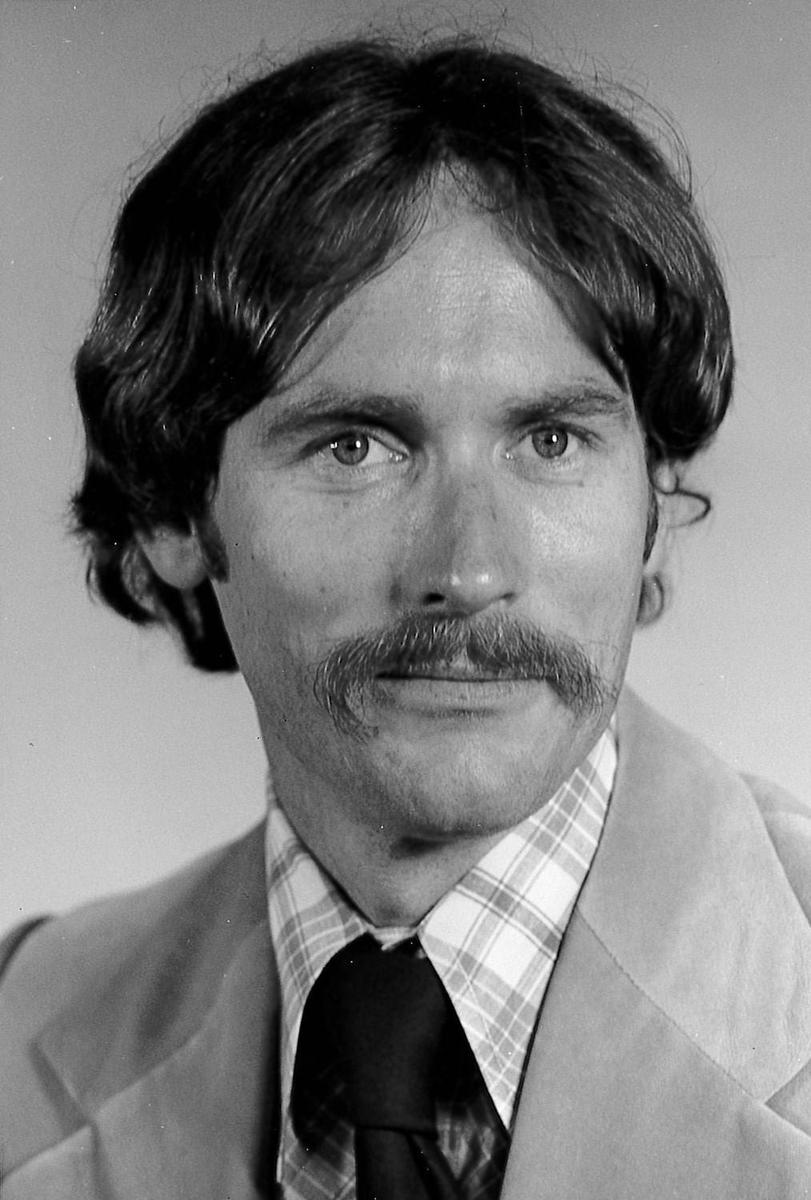 Peter Thomas Farrell was born in Kew Gardens, Queens in 1947. The birthdate tells you that he was part of the initial postwar baby boom. Peter graduated from Archbishop Molloy in 1964. Having captained a city championship track team in all three seasons, he was awarded an athletic scholarship to The University of Notre Dame where he earned his degree in history. He also earned All America status in middle distance running. He put his love of the study of history to immediate use when he accepted a teaching position at Christ the King in 1968.

He recalls fondly how Fellow Hall of Fame member and department chair, Robert Tiedeman, took him under his wing and mentored him into the teaching profession. While at CK, Peter taught Honors American Studies to 11th graders and Non Western Culture to the incoming freshmen class. Farrell claims that it was at CK where his real education took place. In 1973 Farrell petitioned the administration to start a girls track team. This was the time before Title IX was enforced and there were very few opportunities for girls/women in sports. 120 girls came to the first day of tryouts. This number dwindled down to the initial core group of thirty. He guided these stalwart women to the first ever Catholic High School City Championship for Girls. Several athletes were awarded track scholarships to college.

After four years, Farrell had the opportunity to pursue his dream of coaching in college. Princeton University offered him a position to start up their women’s track program and so with heavy heart he moved on from his first love. He remained Princeton’s first and only head women’s track coach for 39 years before his retirement in 2016. During his tenure, his team won 27 Ivy League Championships.

Farrell and his wife (Shane) of 30 years, retired from the University on the same day and began pursuing their passion for travel. Shane and Peter have two beautiful daughters, Virginia and Susan. The Farrell’s live in Princeton, NJand count their  daughters as their greatest accomplishment. 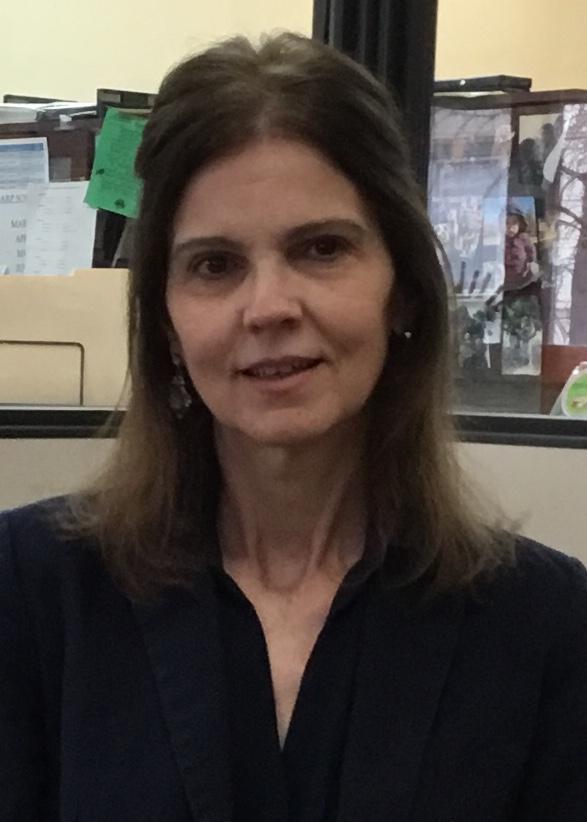 Barbara married her husband, Giovanni, in 1982.   They have 2 children Cynthia and Bruno, and are the proud grandparents of Braden Giovanni and Dylan Robert.

Barbara joined the Peter Cardella Senior Citizen Center in 1992 as a case manager.  In 2000, she was promoted to her current position as Executive Director under the mentorship of the Center’s Chairman and community icon Cav. Peter Cardella.

As Executive Director, she operates one of the largest Department for the Aging centers in NYC. She administers the multi-service DFTA contract to serve 60,000 meals annually. She oversees Meals on Wheels delivery of 500 meals daily to homebound seniors and 800 weekend meals. NYC emergency management named the Center their 2017 Senior Center of the Year.

Barbara was honored by the Campania Federation as 2017 “Woman of the Year”.  In 2015, she was named “Woman of the Year” by Italian Charities. She’s served on Community Board 5 since 2010 and was the recipient of the “Queens Women of Distinction Award” presented by Sen.Serf Maltese.  She received a Commendation from NYC Comptroller John Lui.  Barbara is an advisor of Ridgewood Seniors’ Community Corporation and on the board of Madonna Dell’Arco Catholic Association Barbara is committed to family, community, and her career as an advocate for senior citizens, dedicating herself to the promotion of their welfare and betterment.