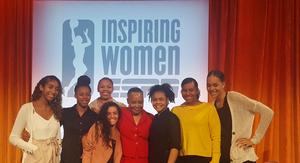 Christ the King High School’s Women’s Basketball team attended the WNBA Inspiring Women Luncheon presented by ESPN was held on Tuesday in New York City. The event recognizes individuals who have blazed new paths on the court, in the boardroom and in the community.

Principal Geri Martinez said, “It was an honor and privilege for our Lady Royals to attend the WNBA Inspiring Women Luncheon and hear from leaders who empower and inspire young women to be the best they can be - both on and off the court.”