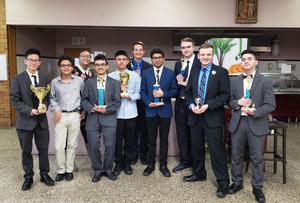 Christ the King Speech and Debate members have once again qualified several members for the State and National Championships.

The following students have earned the right to compete at the New York State Forensic League's Championship Tournament that will be held this year on April 6th and 7th at Hofstra University:

This year the NCFL National Championships will be held in Milwaukee, Wisconsin during Memorial Day Weekend featuring the best speakers and debaters from all over the country.  CK qualified 5 students:  Ian Baksh, Diego Espada, Gregory Jans, and Elvis Soto in Varsity Public Forum Debate and Krystian Makocki in Student Congress.

Principal Geri Martinez said, “We could not be prouder of the achievements of all our Speech & Debate members. We are very thankful for the support of the moderators, Anton Jans, Kristen Tully and Larry Reilly who have helped and supported the team this season.”

The CK Speech & Debate team will continue working very hard over the next few months to prepare for the State and National finals.